Symphony of Ire: Why we should ban the Vancouver fireworks

By Ken Hegan for The Georgia Straight (1997) 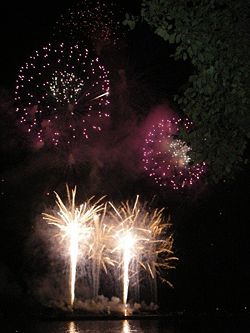 Benson & Hedges’ ‘Symphony of Fire’ must be banned. But it’s not the noise, cigarette company sponsorship, or the air pollution that’s thick enough to choke a stone. No, it’s time we stopped the fireworks because they’re so comprehensively LAME.

To the ill-timed beat of feeble little show tunes, these firecrackers are tossed up to shoulder-height where they pop in either a green or red circle, we hear a few stoned ‘oooohs’ & ‘ahhhhs’, then everybody trudges home.

No wonder fireworks are free: they suck. Fireworks only became popular in North America because the masses needed something to watch after the ban on public hangings. And we only staged public hangings because nobody could afford private ones.

Our ‘Symphony of Fire’ is additionally tedious because the competing countries have no incentive to win. According to Benson & Hedges’ ‘Fireworks Facts’ (1995), “although there is no prize money, the winner is sure to receive exciting contracts and can anticipate receiving an additional million dollars in business internationally.” Of course, if some lucky spectator picks up a smoking addiction as a result of Benson & Hedges’ positive product tie-ins, there also is no prize money. However, this winner is likely to receive exciting malignant tumours and can anticipate additional chemotherapy, massive hair loss, and a model’s body.

Every year I head down to English Bay, waving a goofy neon wand in the hopes of conjuring up some shred of fireworks magic. And every year I’m dissappointed. Benson & Hedges promises “extraordinary special effects”. Which begs the question: “hey, who needs an extra ordinary?” Hell, I get better special effects when I close my eyes, rub my eyelids, and hum Disney’s “It’s A Small World After All.”

I’ve spent more enjoyable evenings watching Freddy, the neighbourhood drunk, get crushed beer cans stuck to the bottom of his shoes, then tapdance around for gift nickels. Even better, Freddy doesn’t seem to have a sponsor yet, although that could change with this publicity. Fireworks weren’t always boring, pointless anachronisms. Centuries ago they were boring, pointless, new inventions. They were invented in 9th Century China about the same time as gunpowder. Awed, the Chinese dubbed fireworks “The Ancient Art of Fire,” after first calling it, “The Recent Art of the Smoky Thing That’s Also Hot And Burns My Fingers.”

Exciting and dangerous as fireworks used to be, compare them with modern ‘Extreme Sports’ like bungy-jumping, girls’ grass hockey, and those wacky, cuckoo Pogs. That’s right: there is no comparison. To paraphrase legendary Saturday Night Live writer Michael O’Donoghue, fireworks today are about as much fun as watching old men die.

Can the fireworks be saved? Possibly, but they’ll need a tip-to-wick makeover. First, let’s lose the generic green and red circles. If balloons blow up into funny shapes these days, why can’t bombs? Let’s see firecrackers explode into interesting shapes like trapezoids, rhomboids, or those spunky yet underrated parallelograms. I’ll even settle for wiggling Vegas showgirls astride four screeching, rutting monkeys.

How about fireworks that shoot up but, instead of exploding, just hang there above the crowd. Stuff ’em with candies, arm the crowd with shotguns, and suddenly we’ve got ourselves an old-fashioned, gun-slinging, piÒata-swinging skeet-shoot. Wouldn’t that be gay? To keep things lively, you could fill every tenth firecracker with paint, nerve gas, rocks & garbage, and/or sewage.

Now that I mention it, why do fireworks always have to go up? Let’s start aiming the fireworks AT THE CROWD. I challenge you to find a more entertaining half hour than sitting on your balcony with a malt liquor in one hand, laughing and holding your stomach with the other, while the Surrey mob below sprints screaming up Davie with their hair on fire, dropping flaming sweatpants as they run.

Surrey’s big-haired car-addicts deserve to be chased around Vancouver by some fireworks with an agenda. Consider it a heat-seeking variation on Murder Ball, that medicine-ball game we sadistically teach little kids. If we run out of firecrackers, we’ll hunt down survivors with spears and pepper spray, funnelling them through narrow alleys where we’ll stone them from on high.

Think about it. If some Spanish dump like Pamplona can put itself on the map by releasing amphetamine-jazzed bulls into the streets to shish-kabob some beer-farty tourists, surely Vancouver’s ‘Running of the Bombs’ can muscle in on the action. As a reward (although there is no prize money), the last person still standing after all the carnage gets to be Mayor.

Of course, this means we’d be stuck with a Mayor from Surrey. But at least he/she’d be nimble.

2 Responses to Symphony of Ire: Why we should ban the Vancouver fireworks