‘It was a spectacular concept: an ice hotel to rival all other ice hotels. It would put Sun Peaks Resort and Kamloops, BC on the map. It sounded too good to be true – and it was.’

I grew up in the hard-luck pulp mill town of Kamloops, BC, out by the oil refinery swamp and the abandoned insane asylum. It was an awesome playground. But for adults, not so much. Unemployment was always high, then the ’80s recession hit. Mill workers were laid off. Marriages split. People loaded up their station wagons and sped the hell out of town.

In desperate attempts to prop up our civic pride, the Chamber of Commerce handed out badges that read “Kamloops needs Sunday shopping!” They created a lame festival called Spoolmak Days (Kamloops spelled backwards) which only reminded us that we lived in a backwards town.

Our city mascot was Kami the Fish, a big green trout with a 10-gallon cowboy hat and two rootin’, tootin’ six-guns. For $3 an hour, my buddy Dennis pulled on the Kami suit to wave at tourists speeding past on the highway. The sun was so hot, he’d vomit from heat exhaustion. Plus kids would kick and punch poor Kami – which pretty much summed up our depressing town.

One of the few economic bright spots was the local ski resort. Known as Tod Mountain since the 1960s, it was bought by Japan-based Nisson Cable, which changed the name to Sun Peaks in 1993. It did this because, as someone finally pointed out, ‘tod’ means ‘death’ in German.

Sun Peaks proved an apt name for a resort that gets 2,000 hours of sunshine per year. In fact, there’s barely any snow in Kamloops now. Dennis, who still lives there, says, “I haven’t seen a backyard ice rink since I was 11.”

Perhaps because of the milder winters, Sun Peaks now sells itself as “the second-largest four-season destination resort in British Columbia.” To achieve this Avis-like No. 2 status, Sun Peaks is trying harder. In the boldest venture Kamloopsians have ever seen, Sun Peaks announced in January 2005 that an “ice hotel” would be constructed in Sun Peaks Village.

In December 2004, Vancouver developer Steeve Croteau approached the Sun Peaks Resort Corp. with his plan to build the world’s sixth ice hotel and the first in Western Canada. Blue-eyed and six-feet tall, Steeve Croteau, 37, had previously run an online barter exchange and, more recently, an Internet-based direct distribution channel for the hospitality industry. The hotel’s annual operating budget would be $2.5 million, composed of sponsorships and up to $1.5 million coming from Croteau’s own deep pockets.

Christopher Nicolson, president of Tourism Sun Peaks, says he loved the idea because Sun Peaks is “a sophisticated, intimate experience, and the ice hotel was very much in the atmosphere of our village.” In a lovely gesture of small-town trust, Sun Peaks set aside a half-acre of land — without seeing a business plan or financing structure.

In February, Croteau told one newspaper that crews would assemble 12,000 to 15,000 tonnes of snow and construct the single-storey building in time for Christmas 2005. Promised Croteau: “Our guests will be walking into a spectacular reception area with ice sculptures, towering ice columns soaring up to a vaulted ceiling complete with a chandelier made entirely of ice.” 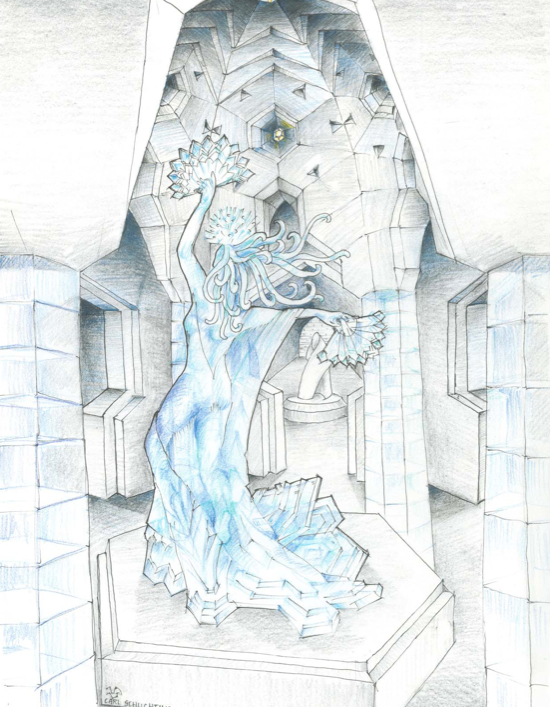 In the same article, Nicolson predicted the hotel’s metre-thick walls would house a new kind of clientele who “will not just be into skiing. They will be here looking for a winter adventure. This is going to put the area on the map.”

Sadly, it now seems Nicolson’s map will remain as empty as Croteau’s promises. On October 11, 2005, the Sun Peaks Independent News reported that “the planned 30-room Ice Palace Hotel scheduled to open at the resort in December will not go forward this winter.” The article gave no reason for the hotel’s cancellation.

So how did the hotel fall apart?

In February 2005, Croteau’s ice hotel website said the world’s “COOLEST Boutique Hotel” would offer “luxury” accommodations ranging from the Igloo, at $500 to $600 per night, to the family-size “VIP Theme Suites,” for a mere $1,500 to $1,800 per night. Guests would party in the Polar Bear Club, billed as “an insanely popular night spot with dancing that will get everyone’s temperature rising.” 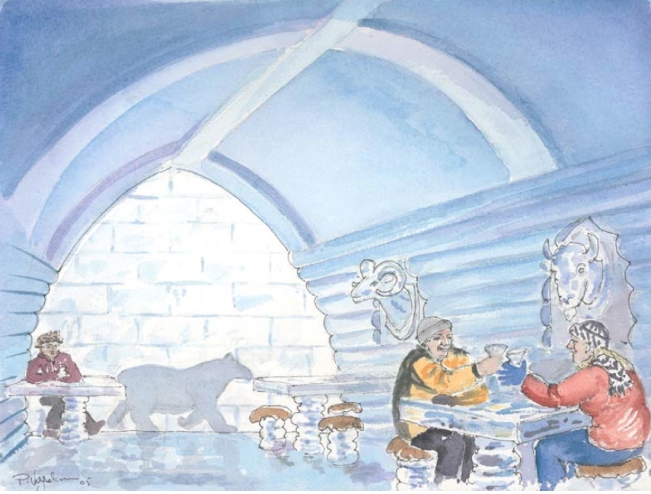 Bar glasses would be frozen, too. “Imagine sipping champagne from a beautifully sculpted flute made from ice as you listen to the latest vibes from Europe.”

According to the sketch, the nightclub would also be haunted by the ghosts of four drunk dancing polar bears.

In July, Croteau’s Ice Palace Hotel Group awarded the $1.5-million construction contract to Kamloops builder Jeff Arnold and his team at A&T Project Developments Inc. The deal was announced on the sunny steps of Kamloops City Hall with a backdrop of snow and ice blocks. “I remember the ice was melting that day, so maybe that was a premonition,” says Nicolson. Croteau told the Kamloops Daily News that each hotel suite would feature $1,300 thermal sleeping bags “designed specifically for cold temperatures,” plus hot “chocolate fondue left on the pillows at bedtime.”

Croteau hired Jorie Ludvig to be the hotel’s human resource manager. She moved from Calgary, bought a house in Kamloops and began working closely with Steeve’s common-law wife and business partner, Anne Wright. Throughout the summer, Steeve talked a team of world-class ice carvers into moving to Kamloops. He offered one carver, Nicolas Cyr, almost double his salary at the Ice Hotel Quebec to become construction supervisor. To sweeten the deal, Cyr says, Croteau promised an apartment and a new truck.

By early September, things seemed rosy. Arnold’s construction teams were building 22 steel support frames in time for the December 16 opening. The carvers arrived, Ludvig was hiring hospitality staff, and Croteau convinced his Web designer, Candace Jensen, to quit her job and work for him full-time.

Jensen said she was going to be married in January 2006. So Croteau promised her a free wedding in the hotel’s all-ice wedding chapel where 90 guests would sit on fur-draped pews. Jensen accepted because, as the website gushed, “Could there be a better destination than the Ice Palace Hotel to create your own fairytale wedding?” Jensen cancelled her Quebec wedding, quit her job, started working for Croteau full-time, and mailed new wedding invitations to her friends and family.

Meanwhile, the reservations were pouring in. “We’ve had about a thousand enquiries from Pakistan,” crowed Croteau in an October 1 story in The Ottawa Citizen. “One caller made a reservation for 40.” All of them, no doubt, attracted by the Polar Bear Club’s enticing 3:1 male-female ratio.

Two weeks before the Citizen story, however, Croteau and Wright quietly disappeared. Wright told some staff that Steeve’s father was seriously ill. Later, Wright admitted to Ludvig that they “had to go to Quebec to get funding.”

While the bosses were away, the employees started to wonder if the Ice Palace was a hotel-of-cards. No business plan, office, computers, paper, or staff housing. Steeve wasn’t returning the builder’s calls. Employees were promised rebates if they bought cars, computers, plane tickets, cell phones, moving expenses and lodging, but nobody I spoke to said they’d been paid back or received a paycheque.

On September 30, after Anne Wright returned to B.C., she shocked the staff by tearfully revealing that the project had collapsed. The next day, Wright told Jensen, the Web designer, that the hotel was cancelled and so was her wedding. “It was awful. [Candace] left her great job in August and was told just a few weeks later that ‘you don’t have a job or a wedding’,” says Ludvig.

Croteau, meanwhile, had split. According to Ludvig, Wright said, “‘He hopped on a plane and left me and has gone to Europe.’ She said [his] ex-wife was suing him, he doesn’t [see] his kids, and the police were going to throw him in jail because he supposedly owes $20,000 per month in [support]. I don’t believe any of it.”

Marie-Claude Sauve, the hotel’s erstwhile food and beverage manager, also wonders if Wright is still with Croteau, after she found this October 25 posting on a Belgian website:

Hi everyone just arrive in Brussels (with my wife) been send here to set up Euro division, my first choice was here as a base, been reading some of the topics, can you give me some option or member association for myself and also my wife that would be great.

Thank you
Steeve Croteau
Back in BC, as the ice hotel melts into a bad memory, I’m filled with questions. For instance: Who spells their name “Steeve”? And is Steeve Croteau a scam artist, or did he genuinely want to make the ice hotel but simply ran out of time and money?

I got a few answers after reaching Steeve at his old hotel e-mail account (Wright didn’t reply to my email). He wouldn’t tell me his location. He said his inspiration for the ice hotel was “a vision.”

I asked him a series of questions about financing, to which he mostly replied, “Private information.” When I asked, “How much money do you estimate is still owed to staff, sponsors, and the Kamloops builder A&T Construction?” he said: “$0. All parties are paid.” (Croteau’s former contractors and employees scoff at these statements. Cyr claims he’s still owed $4,000 for “travelling, phone, lodging, and hours.” A manager, Simon Tremblay, claims he was fired without cause and is owed more than $8,000.)

As to his intent, and why the hotel failed, Croteau said, “We ran out of both time and money, and complications with my ex-wife.” He also said that if he had to do it over, “I would have not have chosen Sun Peaks after discovering from other business owners that the 300,000 visitors that they claim is not valid.” (Sun Peaks’ Nicolson disputes this, saying visitors are counted by scanning computer generated lift tickets: “The number is accurate and well documented. Steeve probably misunderstood the question.”)

Speaking of which, there’s a bigger question that’s been nagging at me: How long was an ice hotel supposed to last at a resort that gets scorched with 2,000 hours of sunshine per year and where winter temperatures average just -6.5°C? My friend Dennis, who wears T-shirts and shorts in February, says the ice hotel was “doomed to drown in a puddle of its own sweet, naive optimism.”

As for the ex-staff, many are depressed and unemployed. Unfortunately, they won’t have Spoolmak Days to look forward to – it was cancelled years ago, along with poor old Kami the Fish. On the bright side, however, Kamloops now has Sunday shopping.

Nicolas Cyr, the young ice carver, won’t be shopping, or chopping, his cares away this winter. He’s marooned in Kamloops and misses his family back in Quebec. “I’m really screwed,” says Cyr, noting his move to Kamloops left him on a “blacklist” at other ice hotels. I ask what he’d say to Croteau if he ever saw him again. Cyr says, “If I ever meet Steeve, I think I will do something stupid.”

At that moment, I realize something that must have occurred to Steeve Croteau: never piss off a knife-wielding French Canadian who’s spent six cold, hard years carving up ice blocks for a living.