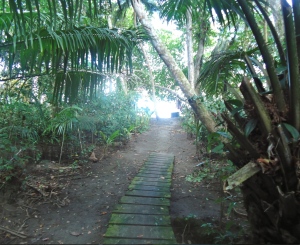 The boardwalk path to Manzanillo Beach

Our next-hut neighbours just popped by for dinner (Translation: we invited them to cook fish for us). The chef/dad/father is a chipper South African who I’ll call ‘Todd’ and he’s accompanied by his charming young wife and their 2-year-old daughter.

Todd’s a gregarious guy. But you won’t find him anywhere online, and certainly not on public forums like, say, South African Expats Reunited on Facebook.

That’s because Todd’s been lying low in rural Quebec for years(1). He’s trying to forget (and be forgotten by) the people who slashed a nasty machete gouge into his elbow, and gave him a long bullet scar down his abdomen.

I’m a curious monkey, so after plying Todd with Nicaraguan rum cocktails, he told me Just What the Hell Happened.

Years ago, when South Africa was divided under Apartheid, young white Todd was a surveyor who built roads into South Africa’s hinterlands. I imagine some villagers welcomed him and his crew. But many others attacked Todd with anger, guns, and machetes.

One night, Todd’s team was ambushed by men wielding AK47 machine guns. They killed two of Todd’s men who were standing on either side of him. Todd somehow ducked the bullets. Then he popped up and shot a dozen of his attackers.

[Note: I’m taking Todd’s word for it that he fired in self-defense, not premeditated racial/political malice. I also didn’t grill him for proof of the number of people he allegedly shot and killed. Yes, I’m a journalist but this was a tipsy family barbecue & dance party, not a trial in The Hague].

Anyway: Todd survived but then the gunmen tracked him down and shot him point-blank in the gut. They left him to die there, bleeding out his stomach. Fortunately for Todd, a farmer heard the gunfire and called the police who saved his life.

Apartheid eventually ended and Nelson Mandela came to power. Suddenly one night, the secret police kicked down Todd’s door, dragged him out of bed, drove him to the border, and chased him out of the country.

Three years later, he washed up on our Canadian shores with barely a penny to his name. He hasn’t looked back since.

Why am I telling you this in a travel column? 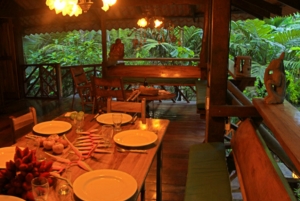 Here’s the thing: as our families sat in Congo Bongo under the lush jungle canopy, while exotic toucans, parrots, squirrels, and flying bugs chirped at us with envy as we feasted on freshly barbecued snapper, papayas, and rice & beans flavoured with hot red Lizano Chilero sauce, I noticed a serene expression sweep over Todd’s face.

It’s the look I see on travellers who are experiencing the rush of a peak life moment. Todd looked thrilled and extremely grateful that he could heal, reinvent himself, fall in love, father a child, and take his family to Costa Rica for a month while his Canadian neighbours trudged through snowdrifts, slush, and sideways rain.

And he didn’t pick the all-inclusive path, either. Todd’s family is literally camping in the jungle by the tiny village of Manzanillo. A beach town a block long, with a grand total of zero traffic lights, not a single chain store, and (other than my family) not a single other North American in sight.

So as Todd watched his daughter play in a forest filled with squirrels, sloths, and spiders. I asked him what he thought about this hot Caribbean coastline.

Todd smiled and told me, “When you lay in bed dreaming at night about where you want to be in the world, this is it. Right here. This is paradise.”

And he’s right. This is a country with sunny, tropical beaches, rolling green surf, a relaxed and cheery culture, that hasn’t had a military since the 1940s, and has the world’s most inspiring record for environmental protection.

You’ll find out when you come to Congo Bongo for yourself. No matter what road brings you here, Costa Rica is paradise.*

*Well, it’s paradise unless you prefer golf carts, buffet breakfasts, sunburned beer bellies, and neon wristbands you get at all-inclusive resorts, or if you’re addicted to TV or reliable satellite Internet, or are possessed by an inexplicable fear of animals that like crawling inside your mouth when you sleep, or if you prefer to spend your holiday hunting animals who can’t use their opposable thumbs to pluck your gun away, or if you have children prone to sickness, whining, or morbid obesity, or if you have pretty blonde hair that you don’t want to turn dark orange from all the red iron in the tap water, or if you have no legs to propel you to the beach, or are a compulsive banana hoarder who refuses to share with simians.

(1) He does not live in Quebec. I made that up to fool angry people with machetes.

Bing: how to hide out in Costa Rica