How I won the Marbella Club Spring Games (sort of) 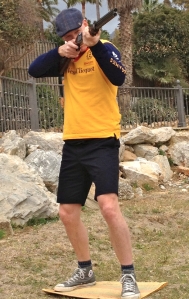 So I’m recuperating at the Hotel Marbella Club in Andalusia. It’s a 5-star luxury resort on the Costa del Sol in the province of Málaga, Spain.

I’m not here for the sun, waves, or deep tissue massages next to the seawater pool at the Marbella Club’s Thalasso Spa on the beach of the Mediterranean Sea.

Nope, I came to totally win the Marbella Club Spring Games. And now my body feels so banged up, I feel like I’ve been thrown from a Rolls Royce for not sharing my Grey Poupon mustard [if this reference is confusing, Google it yourself because I’m a Busy and Important Athlete].

The Spring Games are a madcap competition in which two dozen aristocrats, millionaires, and captains of industry compete in 6 challenging sports in 1 gruelling Spanish day.

The Games began in the ’70s. The resort’s resident owner, a German prince named Alfonso de Hohenlohe, wanted to promote how many sports you could do at his resort. He envisioned a friendly competition which he dubbed ‘Ski golf swim bang’ [though a renowned playboy who dated steamy actresses like Ava Gardner and Kim Novak, ‘bang’ refers to shooting]. His drinking buddies, including hairy-chested Scotsman Sean Connery, agreed that the Games would be a brilliant way to carry martinis around the Costa del Sol.

So the prince launched the Spring Games. For two years in a row, the men set off to complete all the sports. And for two years straight the Games were aborted before dinner because they’d drank too much champagne at lunch.

The Prince passed away nine years ago.Then in 2010 his nephew Pablo revived the Games and they’ve been a massive success.

It costs 450 Euros to participate in the event, and much, much more if you’re purchasing auction items at the charitable awards dinner. But it’s not open to the general public. Participation is by invite only. So it’s basically a family party for well-to-do cousins, family friends, business chums, and…well, me. I’m here to report on the event and win for regular punters everywhere.

I’m ferociously competitive but, alas, my go-to sports are hockey and billiards. Which are not on the list of six sports. Worse, I’m competing against millionaires and jet pilots who learned how to golf, water ski, and shoot clay pigeons when they were still lying in their baby baskets. 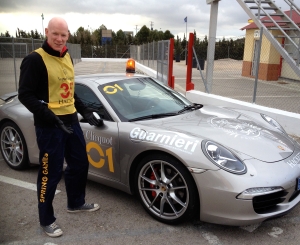 First off, I couldn’t sleep at all the night before. Too much adrenalin. The Games started at dawn but I didn’t wake up until I was in the middle of go-karting at 10:30 am.

The event is sponsored by Hackett (who made the wicked primary-colour jerseys I’m sporting), Veuve Clicquot, Porsche, and Guarnieri Consecionarios who supplied new Porsches to literally race us around to all the events.

This was an absolute blast. My competition included a jet pilot and deep sea diver from South Africa who drives like an absolute maniac. I worried that he would bump my go-kart the same ferociously aggressive, tailgating way he drove our Porsche Panamera. But arse-bumping wasn’t a problem.

That’s because I roared ahead of the pack to be the early leader. But my competitiveness got the better of me. I lost the lead by spinning out on tight turns, THREE TIMES. Finished a disappointing 9th out of 16 men, which meant I was one place out of getting points for the event. Sorry, North America, I let you down.

Golf is brutally hard to master and the lovely Marbella Club golf course is a hill- and trap-filled demon. Thanks to advice from a great Dane, Pieter, my swing went from wretched to acceptably miserable.

TRAVEL TIP: you can distract wealthy golf partners during their swing by offering to sell them entire countries full of people and spoils of war.

Wait…polo? On horseback? Yep. The weather’s been too warm so the local ski resort closed its runs. The Games’ organizers briefly considered replacing it with bullfighting (!), then settled on Polo.

When we showed up at the polo grounds, the horses looked fired up, as if they wanted to toss a rider to see if they could shatter a human back. My Danish golf partner said he was passing. He hates horses. Plus he noted that only the top 8 competitors score points in each event. I counted the number of competitors wearing riding boots. There were 10 pairs. So I saved my spine by passing, too. The winner was Andreas and he was magnificent. Followed closely by the South African jet pilot, Jan-Franco, who rode his horse like it was another high-performance machine.

TRAVEL TIP: horses are incredibly sensitive. If you don’t mount the animal correctly, the horse won’t respect you and it’ll do whatever it wants. So learn how to ride and show the horse that you’re the boss. Note: this does not mean punching the horse in the nose.

This took place by the sea near the Marbella Club where we sipped Veuve Clicquot champagne on the sand. They handed us laser rifles. Then we stood on the stand and fired out towards the ocean. We also shot at small kids trying to catch the falling flying saucers. I lost by a laughably wide margin, but I did manage to shoot four of the little flying saucers and two of the children (in my mind). Shooting is incredibly addictive.

TRAVEL TIP: Rich folks are quite skilled at shooting. I figure they’re preparing for the inevitable revolution when the angry, poor ‘99%’ rise up to storm their castle walls. When that dark day comes, the rich will pick them off one by one. So if you want to beat the rich at their own game, play first-person shooter games with a glass of Veuve Clicquot in one hand.

The day was unseasonably cold and rainy. So water skiing (without a wetsuit) was the event NOBODY was looking forward to. Still: all 8 of the women braved the cold seawater to be dragged behind a jet ski in the rocky surf. Only 8 of the 16 men went into the water. I have no hair and zero body fat, so I bailed. Everyone mocked me, since I’m Canadian and we’re supposed to love the cold.

TRAVEL TIP: avoid anything that makes you shrink in stature.

I know you’re thinking ‘What the hell is paddle tennis?’. The Spaniards sure know. The sport’s been popular in Marbella since 1974 when the Prince imported it from Mexico where it was invented by the Mayans. It’s a wild combination of tennis, squash and racquetball that’s played on a scaled-down artificial grass (and sometimes clay) tennis court.

The Mexicans played on a fenced off court but the prince added walls in Spain to keep the plants and vines from winding into the court. The walls makes the ball bounce in nutty directions, making paddle tennis such a challenging Spanish sensation.

The Spaniards chuckled when I asked how to hold the paddle. Then I went out and DEMOLISHED the competition. I’m either a prodigy or the idiot savant of Paddle Tennis. At last, I have found my game.

My partner, Mario Guarnieri, gave me excellent tips on how to frustrate our opposition. We won three straight games against increasingly excellent opponents. My best move was in the semi-finals when I dove to make a thrilling volley that saved the game. I’m not making this up.

My opponents couldn’t believe it. I won at a sport I’d never played before. Some hated me for it. Everyone feared my backhand slice. And everyone wants a rematch next year.

TRAVEL TIP: to win at Paddle Tennis, hit the ball cross-court into the corner just before the wall. This will make the ball lie down and die, much like Europe’s economies will if the communists get elected in France this Sunday (I borrowed this joke from my aristocratic competitor. If it’s not funny, blame her). 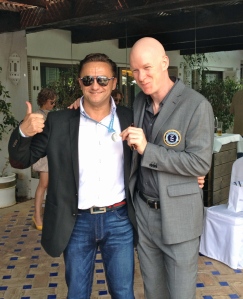 This year’s winners of the Spring Games:

Basically, the Marbella Club Spring Games are like a mini-Olympics for the rich and infamous, in a part of the world that most North Americans have never heard of.

And now that I’ve had a glimpse of how great this place is, I don’t know why it’s such a secret. If you get a chance (and a gunny sack full of gold dubloons), find your way here, as did old-school Hollywood stars like Cary Grant and Grace Kelly.
IF YOU GO:

Marbella is a one-hour drive from Malaga airport, which is a quick 72-minute flight from Madrid.

Book a room or private villa at the Marbella Club’s website here.

Accommodations at the Marbella Club start at 405 Euros a night. Chicken feed for billionaires who carry chickens around to use as currency, which strangely enough they do.

Ken was a guest of the Hotel Marbella Club.