His whole life, he’s dreamed of swimming with Hollywood sharks.

Now my buddy Peter New, a Vancouver-based actor, is so close to the surf he can almost taste the kelp and Santa Monica sand.

So Peter is almost/sort of/nearly/kind of a big deal. Time for him to go Hollywood.

Last spring, I helped Peter train to become an overnight Hollywood success in just one (1) week. I chronicled our L.A. roadtrip here, here, and here, and Peter wrote about our roadtrip for MSN here (part 1) and here (part 2). 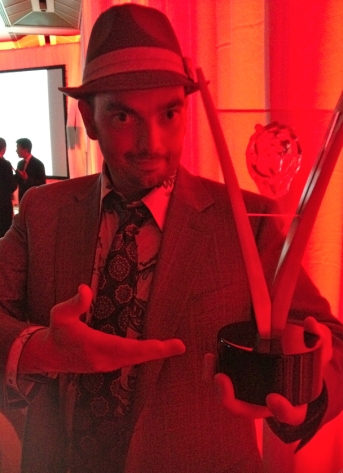 Peter’s career has since caught fire like a Malibu mansion in the Santa Ana winds.

He’s snagged big film roles, walked down tens and tens of red carpets, hired a publicist, and become a popular pony. Then this week he was nominated for a Leo Award, which is like the Oscars & Emmys of British Columbia except instead of limos, some nominees arrive on electric bikes.

Peter’s nomination is for Best Supporting Performance by a Male in a Feature Length Drama for his Sunflower Hour role. He dropped a heap of dough on a suit for the ceremony, held at the Hotel Vancouver. He was so excited, I crashed the gala  on Saturday night to interview him just before his big moment. I wanted to find out where he’d take the trophy when he won.

He said, “Ken, if win a Leo tonight, I’m taking it on a victory tour to the following four places…”

#4) VENICE, ITALY
“I’ll take the trophy on a gondola ride on the Venetian lagoon. It will be very romantic,” said Peter.

“I’ll take the Leo home to see its lion relatives.”

“Where is that?” I asked. “Can you tell me how to get, how to get to Sesame Street?”

“My film, Sunflower Hour, was about a children’s show. And you haven’t made it in Hollywood until you’ve done Sesame Street,” said Peter. [Editor’s note: Sunflower Hour is a behind the scenes look at the seedy underbelly of puppeteering and what it really takes to make it in children’s television.] 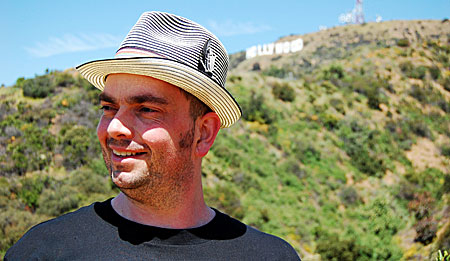 By that point, the Leos were nearly over and our table was restless. Peter’s category was about to be announced. Peter’s friends, fellow actors and actresses, his special lady friend, and his agent all fidgeted in their seats. Up onstage, the tuxedo-clad presenter opened the envelope and said, “And the Leo for Best Supporting Performance by a Male in a Feature Length Drama goes to…”

Some other guy, alas. Our table groaned. If Peter was bummed, he masked his disappointment well. Then again, he is an actor.

After the ceremony, we had drinks at downtown Vancouver’s stylish South Beach-esque nightclub called Black + Blue. I asked Peter where he’d go next.

“Ken,” he said, “I’m going to drown my sorrows in four of the world’s most beautiful places, as follows…”

PETER’S LIST OF EXOTIC PLACES TO DROWN HIS SORROWS

#4) SOMEWHERE IN THE SOUTH PACIFIC
He wasn’t specific…just anywhere hot and gorgeous where nobody’s heard of a Leo Award. So I suggested the Rock Bar in Zanzibar which is located in the Indian Ocean off East Africa.

Here’s an incredible photo from their Facebook page. The Rock Bar is perched on a rock in the impossibly-green Indian Ocean.

“LOOK AT THIS PLACE!” I shouted at Peter as I showed him a photo on my iPhone.”

“Exactly. You must go there immediately.”

#3) THE ASYLUM BAR in HONDURAS
“Because losing can drive any man insane.”

#2) ROCK BAR in BALI, INDONESIA
“Because I need to remind myself that one hits rock bottom several times on the way to the top.”

“And I want to spend a few weeks at this Amalfi coast holiday villa,” said Peter.

“Because it’s effing gorgeous. But mostly because it has a bar built into a cave, so I can drown my sorrows in paradise and darkness,” he said with a laugh.

How about you, dear reader…if you won a trophy, where in the world would you take it?

For more info on the Leo Awards, visit LeoAwards.com