An Australian beer company is brewing an island of men.

XXXX (pronounced fourex) GOLD is a pale lager in Australia that contains a whopping 3.5% alcohol. Pretty thin stuff. It’s like when I was a kid and my friend’s weird cheap mom watered down their milk. That’s what XXXX Gold kinda tastes like.

But it’s sure popular down under. The company claims it’s “Australia’s leading mid-strength beer.” And they’re making so much money off it, the beer company JUST TOOK OVER AN ISLAND. 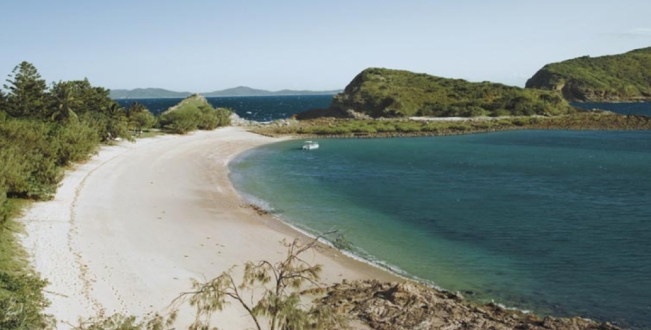 It’s a 15-acre bump-in-the-ocean called Pumpkin Island on the Southern Great Barrier Reef just off the Capricorn Coast. XXXX GOLD has leased this plot of land for the next three years, and when it re-opens for beer drinkers this October, they’re renaming it XXXX Island. And sorry, ladies, but they’re making it MEN ONLY. 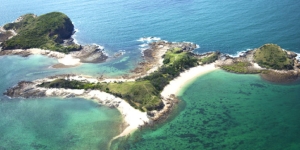 The beer company’s billing their XY-chromosome island as the “ultimate destination for mate’s trips away” because “all men need an island.” It’s like a sports bar built on sand and testosterone.

What could possibly go wrong? Other than being stuck on an island of beer-soaked louts with absolutely zero women around to break up the inevitable fights.

On the bright side, there will never be more than 28 guests on the island at any time. So if the island runs out of food and 3.5% beer and the whole experiment descends into a bloody Lord of the Flies/Hunger Games competition for survival, you only have to defeat 27 tipsy rivals.

XXXX GOLD says their guys’ getaway will offer Aussies the ‘good life’ including “fishing, touch footy, beach cricket, swimming in the ocean, sharing a yarn with your mates as you fire up the BBQ, and barbecuing the catch of the day with a beer in hand.”

Anna McMillan, XXXX’s marketing manager said the company concocted the XXXX Island scheme to give Aussie lads genuine “mates time” away from their wives, kids, and jobs. So it’s sort of like Brokeback Island for guys to safely spin their bottles.

You can suggest rules for the island here. The company’s also inviting suggestions for fun drinking activities and gear like a one-hole golf course, and solar powered beer coolers. Aussie guys who submit the best ideas for the island to the website can win a getaway for themself and three mates (NO GIRLS ALLOWED!!!!!) valued at AU$10,000. Ideas so far include a beer butler (wearing board shorts and tails), a beach treehouse with a firepole and basketball hoop, and an automatic suntan lotion machine.

Here’s XXXX’s sketch of what ‘Bruce the beer butler’ might/will look like: 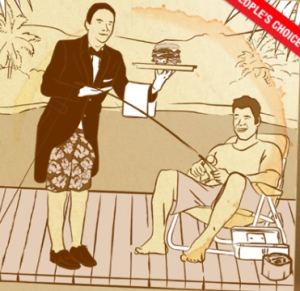 WARNING: if you want to suggest guy-on-guy activities like ‘Drinking rum shots off your best buddy’s tummy’, sorry, you’re out of luck. The company says XXXX Gold “will be the only alcohol served on the island.”

What activities would you recommend for an all-guy island getaway? And what beer would you drink if you were stranded on an island?

BING: how to survive being shipwrecked on an island