It’s 9:50 p.m. on a warm saturday night. an unmarked van enters Isla Vista, a Santa Barbara suburb packed with tanned skateboarders and cyclists. Seconds from the beach and the University of California at Santa Barbara, Isla Vista is one of America’s hardest-partying neighborhoods; around 20,000 students are crammed into its high-rise towers, residence halls and frat houses.

Calli is quickly surrounded by a screaming crowd of drunks. She whips out her bullhorn and asks for volunteers to strip down to their underwear. This is the modus operandi for Shane’s World: Loosen up the crowd with silly party games, humble a few guys, then use them as performers. Three come forward. Calli instructs them to strap on diapers and suck on the baby bottles and pacifiers. After a few seconds of highly subjective adjudication, she decides that Hagen, a twenty-one-year-old UCSB film major, makes the best baby of the bunch. His prize: a blow job.

Hagen looks anxious, saying, “No, no, no. I’m not going to get a blow job on camera.” Calli takes him up to a bedroom and whispers how great it will feel. Hagen’s friends mock him, chanting, “Don’t be a bitch! Don’t be a bitch!” But Hagen lets them down with “My mother would kill me.”

So Calli gives up, grabs the second-place baby, twenty-one-year-old Matt, and they enter a filthy, sweltering, windowless bathroom. Shane’s World co-owner, who goes by the name Brian Grant, follows with his video camera, along with Matt’s best friend, who locks the door behind them. Calli takes off her shirt. Kisses Matt. Then kneels at his feet.

When she’s finished with Matt, Calli bounces down to the living room for the breast-sucking competition. The rules: Calli and her petite brunet colleague, Taylor Rain, will bare their chests. Then a row of guys will take turns sucking their breasts. Best breastman wins a tag-team blow job. The security guards clear a circle around Calli and Taylor. Trevor, 18, a business student, wins the skills test, but he’s too drunk to get it up. 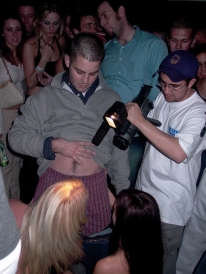 In the wake of leaving Shane’s World, Shane was involved in a nasty trademark battle with two former employees: her personal assistant, a freckled redhead who goes by the name Jennie Grant, and Jennie’s partner, cameraman Brian Grant. (Even though these two make a large amount of money exploiting college students, many of whom are inebriated when the cameras are rolling, they are afraid to put their real names on their work.) When the dust settled, Jennie and Brian owned the company and agreed to license the Shane’s World name.

When asked what she thinks about Jennie and Brian’s new campus-porn flicks, Shane, who now has two young children, says, “It’s just wrong. College kids are there to do something with their lives. Whatever they do on that video will always be around. Their families are always going to know, and wherever they go and work, it’s only a matter of time until those people find out, too.”

At the time, Brian Buck was executive vice president of the Arizona State University student body. But when Shane’s World, Vol. 29: Frat Row Scavenger Hunt 3 was released, the new ASU president, Michael Crow, blew a gasket. Concerned the incident would revive ASU’s image as a party school, Crow slammed the students’ behavior in a statement to the press and demanded a full investigation into the fraternity-porn video. Within hours, reporters were peeking through Buck’s bedroom window and phoning his parents in Portland, Oregon, for their reactions. Then the story broke on CNN. “That’s how my grandparents found out,” Buck says. They were watching TV with friends at their yacht club when CNN aired his three-way shower kiss. “There was so much anxiety that I was throwing up for the next two days,” he said. “I couldn’t eat.”

Though the students’ eyes were blacked out in the video, ASU quickly singled out Buck for sacrificial slaughter — partly because of his position in ASU student government, and partly because he was the only guy in the video whose name was chanted over and over by his buddies. Still, Buck refused to resign his vice-presidency. He told the Arizona Republic, “I’m not apologizing for anything I did. It’s not like this is Harvard.” ASU kicked Buck out of his Sigma Nu frat house, barred him from living on ASU property, prohibited him from university employment and put him on permanent probation. They also made him write four apology letters, do 100 hours of community service and write a twenty-page paper. Its somber title: “Reflections on Integrity.” After weeks of stress, legal hell and physical threats from students and strangers, Buck caved in and resigned his vice-presidency. “I will always be discriminated against and thought of in a poor light,” says Buck.

The Shane’s World office is in an industrial park on the outskirts of Los Angeles. It’s stuffed with toys, a heavyweight punching bag, and stacks of promo T-shirts, ski hats and DVDs. Video lights are aimed at a neatly made bed. Friendly but worried about bad press and angry parents, Jennie and Brian are both clean-cut and college educated. They claim their campus parties are providing a fun and healthy service for the youth of today. “Everybody wants to see movies that they can relate to,” says Jennie. “Our movies fill a certain niche. The college guys that are in our movies aren’t in regular adult movies. Guys in the business are beefier, have really large penises and are really buff. Most guys don’t look like that.” Brian adds, “I think college students like our sense of humor. We’re just like them. We’re the MTV of porn.”

For Jennie and Brian, the Arizona shoot was a revelation. “This is about the most fun we could ever have,” says Jennie. “Nobody else is really making adult movies that are geared towards the college audience. This was awesome.”

Taking another run at its huge success, Shane’s World flew to Bloomington, Indiana, in October. “We picked Indiana University because the Princeton Review ranked it as the number-one party school in the nation,” Calli says. With four female stars (Calli, Mallory, Belladonna, Evalyn) and two obligatory studs (Tex and Mr. Marcus), it didn’t take long for sparks to fly and flies to unzip. After the girls were kicked out of the campus radio station, WIUS, for performing cunnilingus on Evalyn while on the air, the performers drifted around the leafy campus. Evalyn picked up Alexander, a freshman, who escorted her and the film crew back to his dorm.

In an IU news release, Brehm slammed Shane’s World, stating, “These were deplorable actions by a company intent on exploiting the university and our students. These are sexual predators whose behavior violates all basic principles of common decency.” Calli responded for Shane’s World by saying, “One student told us he films his own adult movies in his dorm room all the time. These things happen on your campus whether we are involved or not.” Adds Brian, “It’s a fucked-up situation. Students should have the right to have a private life. I feel bad that they’ve gotten in trouble. That is not what we’re about. The schools made it worse for themselves by making it such a big deal. They’re the ones who got the press involved.”

Out in Arizona, Brian Buck is low on cash. His mom and dad are no longer paying his tuition, so Buck demanded money from Shane’s World. They offered him $500 for his troubles. According to Calli, he refused the offer and wanted them to pay for his three years of law school. Shane’s World told him to go pound sand. “He got greedy,” says Calli. Buck graduates from IU in May with a business degree. “There was a lot of things I wanted to do in my life that I may not be able to do now,” says Buck. “I wanted to go to law school and maybe be in politics. But what community would want me to represent them now? For years I will have problems, all because of a two-minute mistake.” Asked if he has any advice for the California students fresh on the reel, Buck says, “I wish I could warn those kids about what this is going to do to their life. I wish I could have my anonymity back.” He adds, “Without showing any ethics, Shane’s World has done severe damage to my life and many others’ for their own gain.”

For the company’s next project, Jennie says Shane’s World is always looking for invitations from college students: “If we get an invitation, we’ll be there in a New York minute.” Brian says students at one campus have just invited Shane’s World to visit their college town. Their inspiration? The Indiana video. “It’s all set up . . . and they say their parties will kick [Indiana’s] ass,” Brian says. “They even said they’d go in and take AIDS tests. They want to fuck the porn stars. This is something that every college guy dreams about. So why not make that happen for them?”

One Response to Rolling Stone feature: The New Sex Ed